This offer ends in:

A beautiful, durable object that can be used both for stunning displays and efficient cutting. The handle’s design incorporates the ancient Norse god Fenrir – known to many as Fenrisúlfr because he has two heads (the wolf) on one body with eight legs- alongside its powerful metal head engraving which resembles volcanic earth in coloration when heated up next time you decide to use your new purchase!

An axe was every Viking’s trusty tool and a reliable, readily available weapon of choice among Norse people. When it came to managing and repairing their ships – longboats made entirely out wood (and not because they were too lazy), axes were the only way for those ancient maritime warriors who wanted them in control! On land an ax served many purposes: chopping firewood or felling trees so you can build basic defenses against raiders? Placing one against your enemies’ throats before battle begins sounds like just what this versatile blade needs most–ready at any given moment from its home on board ship during all kinds of adventures ranging across water-bound pastures ahead…

The leather cover is included. 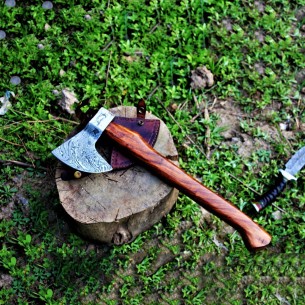